skip to main | skip to sidebar

I've come across many articles about carbon capture and sequestration (CCS) methods but the article "Scrubbing the Skies" in August 2010's National Geographic Magazine was unconventional, challenging and quite ambitious...so fascinating...

Dr. Klaus Lackner of Columbia University believes that even if we plant more trees and grow more forests, it would not solve the carbon dioxide problem. We would have to preserve more wood and if it rots or burns, the CO2 is back into the atmosphere again. So Dr. Lackner suggests that we use artificial trees that suck up CO2 out of the air thereby decreasing the CO2 concentration in the atmosphere. These "artificial trees" would be 1000 times faster than the real ones. Dr. Lackner and his colleagues have experimented with whitish -beige "plastic" leaves. This plastic is analogous to the resin used in a water softner that pulls out calcium from hard water. When the resin is impregnated with Sodium Carbonate, it pulls out CO2 from the air and gets converted to baking soda. CO2 Scrubbers using this simple chemistry are used in submarines and space shuttles to recycle exhaled human breath in closed spaces.

The plastic leaves which have accumulated CO2 are then rinsed with water in a vacuum chamber and the CO2 comes off. This CO2 is then compressed and pumped deep underground. Another option is to add hydrogen to the CO2 and convert it back to hydrocarbons. And the author of the article suggests that if that energy used to make hydrogen and utilising the CO2 to generate liquid hydrocarbons came from renewable sources, then engines burning that fuel would emit no new carbon. 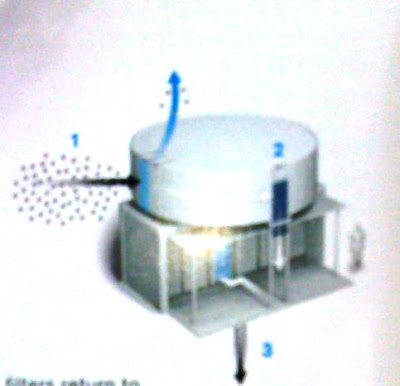 (1) Wind blows air through the plastic carousal's plastic filters with an abrobing agent. The "exhaled" air contains less CO2 :) (2) As the filters become saturated they pass through a vacuum chamber where water vapour is sprayed. Co2 comes out. (3) The filters return to the carousal which rotates. The CO2 is separated from water and compressed into a liquid and pumped underground. 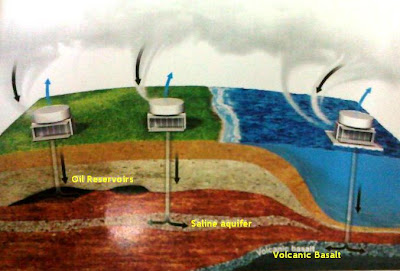 The CO2 can be pumped to oil reservoirs, Saline aquifers or volcanic basalt beds for storage. It will rarely escape from such closed spaces into the atmosphere.

This idea looks great but needs huge investment. Even the first option of compressing and pumping CO2 underground from the scrubbers entail heavy energy consumption-renewable energy may not suffice. The plastic leaves will definitely emit a lot of carbon during manufacture. What could be the pay back time? It would have been better had the article spoken about carbon- balance or energy balance and if it results in a surplus saving of carbon emissions and not add more carbon due to the conversion processes. (Shouldn't turn into a penny wise pound foolish event). Hope this turns out practicable.

Posted by Manoj Patnaik at 11:09 AM No comments: 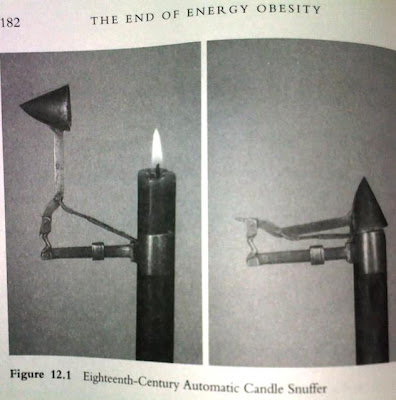 This is an image taken from the book "The End of Energy Obesity" which shows an 18th century automatic candle snuffer. Candles were precious at that time and so using them judiciously was the need of the hour. People used to set the level/time before going to bed till which the candle should burn and these simple mechanical systems never failed to "turn off" automatically. Can't we build simple to use energy saving devices for electricity and thermal energy?
Posted by Manoj Patnaik at 1:37 PM No comments:

Some statistics from the IPCC 2007 report:

As per the IPCC models, between 1999 and 2099, the avg temperature of the planet will rise by between 0.3 C and 6.4 C; the sea level will rise between 0.18 and 0.59 metres and the ocean pH will be reduced by between 0.14 and 0.35. The models predict that warming will be greater on land compared to oceans which will lead to melting of ice in the northern latitudes, intense cyclones etc. So to stabilize the CO2 concentrations in the atmosphere at 450 ppm and increasing the avg temperation by up to 0.5 C in the 21st century, considerable effort will be necessary to reduce emissions by 2460 Gt CO2 to 1800 Gt CO2. Past and future CO2 emissions caused by human activities will continue to contribute to global warming and an increase in ocean levels for more than a millenium, due to the timescale necessary to remove these gases from the atmosphere.

Posted by Manoj Patnaik at 5:37 AM No comments:

Posted by Manoj Patnaik at 3:49 AM No comments: